Why Don’t You Meet Them Evils With Us 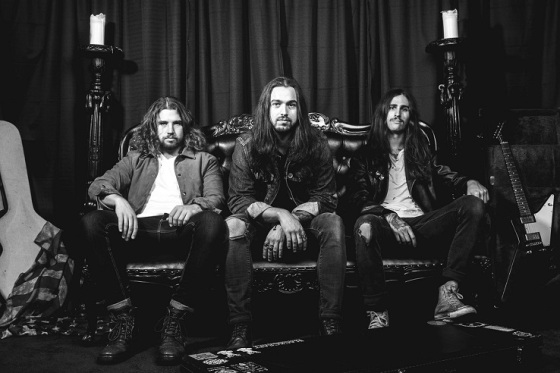 We got a chance at the Louder than Life Festival in Louisville, KY to meet one of the greatest new acts to hit the stage.  Emerging from Las Vegas and Orange County, California is the incredible trio called Them Evils.

Unpaid Gamers: It’s great to meet you guys…Why don’t you start by telling us a bit about yourselves?

Yeah… We’re brand new, we are a newer band, we’re from Orange County, California and we just play rock and roll.  That’s what we like to do… We have fun, drink whiskey, and want people to have a good time because that’s what our music is mostly about.

UG:  So whiskey drinking and Rock and Roll playing..

UG:  I don’t blame you there, that sounds like the life.  From what I understand two of you moved from Vegas to Orange County right?

UG:  Is there a difference in the music scene between the two cities?

Vegas is just like, I don’t know… the worst.  I mean i love it and its my home.  But it’s all DJ’s and like there’s nothing wrong with that but it’s all clubs.  There is a very hardcore club scene.  It’s not very well-rounded and it’s just trendy.  No one’s in it for the music, they’re in it for the trend.  Orange Co. is a lot more… There are people like that in Orange Co., but it’s a lot more open-minded especially with like L.A. right there.  It’s really good for Rock and Roll so it was kind of a no brainer for us to move out there.

UG:  How long were you playing together before you moved?

(Jordan) About a year… Well me and Jake pretty much lived on the same street, so we always had the same music taste.  We listed to Pantera and Metallica and stuff like that.  Then one day we were like let’s start playing music, then we decided we wanted to do this for a living.  We decided to go to California and that’s where we met this sweetheart. (Patting David on the shoulder)  He’s the heartbeat of the band and if he messes up, we mess up… So he’s the most important.

(David) Yeah, that puts me on the spot.

UG: So how was that on both ends?  Two guys playing together for a while,  and you’re the new guy…How did of all that go down?

(David) A really great friend of mine from back in high school…  I was looking for a band and I was leaving the project I was doing before and I was auditioning for a ton of bands and it wasn’t working.  I was near the point of dropping everything and then I got a call from her at like 3am in the morning and she was like “I’m at a party with a guy I work with and he said he’s in a rock n roll band and needs a drummer!”  They sent me stuff to work on and I showed up to audition and did some covers in the mix of it and it just felt right.  The rest is history, here we are now.

UG:  I read a bit about your music influences which include Led Zeppelin and AC/DC.  These are greats for everybody i think, but what is it about some of those bands that really drawn you in and inspired you?

Just the sexiness.  You know the spunk… like Bon Scott.  There is no one spunkier or sexier than that dude.  So definitely AC/DC, the you got Jimmy Page and Robert Plant.  Robert Plant is a sexy mother fucker.  He is a sexy dude and sings great and the things he talks about ya know?  AC/DC talks about getting laid and partying and playing Rock and Roll!

UG:  Drawing from that and your current sound… I mean we think you guys rock and you almost have a blues-ish sound to me…

There’s Blues in it for sure and it’s a big part of it.  Definitely Blues guitar is the first thing that like catches my ear first and that’s what I play.  Just the Blues skills and the emotion behind the Blues, that definitely comes out in our music.

UG:  You guys played the pre-show last night right?  What did you guys take from that?

It was nice because last night we had a later set so the people coming to the festival got a glimpse.  We got a decent crowd there and got flashed.  There were some boobies and it was nice for those people who aren’t able to make it that early in the morning on Sunday.

UG:  That’s how you know you have made it, when you start getting flashed.

UG: I see you’re about to start on tour with Pretty Wreckless and Holy White Hounds, but you are starting off with this festival.  Is this your first Festival Experience?

We played Lost Highway in San Bernadino.  It had like death metal and we shared the stage with Foghat, Chevy Metal.. who is here today, it was a cool show.

UG: It’s definitely a big production out there so I’m sure you’ll get lots of…

We haven’t even seen any of it, we’ve been in here the whole time.

UG:  That’s the downside of being in this media tent, if you aren’t careful you miss a lot of the good stuff.  I see you guys have two EPs out and a Single, is that correct?

Yeah, so we have Cold Black Love and our self-titled EP.  That’s Them Evils EP and that has our single the Untold and that’s the song that we are pushing the most.

UG: And for good reason because that is a great song!

It was the last song that we kind of put together with this EP.  We went into the studio and we weren’t sure on it and I put a fuzz petal on it.   Then an octave petal and we were like… “Aw, that just sounds right!”  It was just one of those spur of the moment songs but it worked.

UG: Are you all going to stick with the EP format or you going to work on a full album at some point?

Kind of just play it by ear.  Once we get back from these tours we are going to start writing and see about our budgeting and just whatever we feel.  If we feel we have enough for an EP or if we get super excited and bust out a full length… It all just depends.  But definitely depends on how the next few months go.  So we’ll see.  We would love to do a full length, that would be bad ass.  More time though, it’s in the future but we definitely want to do one.

UG:  Some bands they just prefer to do the EP format and get the music out there faster.  We spoke about Raveneye which told us they held that mentality for quite a while.

Business wise it just seems smarter to release a EP or a few singles before you go full length.  Give people an idea of what you’re going to bring before you put out a full length.  I’ve always thought with EPs people have such short attention spans.  People are supposed to be stoked and stuck those songs for years until you do another one or you could do 4 or 5 songs  and release an EP.  Release that at like 2 EPs a year so after a year you have more EPs to be released to get people stoked.  Then you can put all the EPs on a full length and they will buy it then.  That’s the business side of it and that’s the part we don’t understand.  We just play the music.

UG:  Well you know as long as you’re good at one thing.  Whether you’re at least good at the business or music side,  that’s all you need.

You guys are a fairly new band so this has to be a big life change.  What did you guys do before music?

UG: Working for the man sucks!

Yeah!  Working for the man does suck, it’s depressing.

UG: So you’re handling the transition well i assume?

Oh yeah we love it!  After the last tour in June and got back to reality.  It was like… “Why did we come home?  Let’s go back!”  That’s exactly what we did.  We set up another tour.  We love traveling too and just seeing the country, exploring new places.  That’s the most fun of the tour for me… and seeing boobies and playing Rock n Roll.  Eating new food, drinking in different cities, and meeting new people.  It’s an all around great time!

UG: You guys tour until December 6th.  Do you have big plans after that?

Writing.  Write some more music and make another EP.  Do another tour, go to Europe and play some Rock n Roll.

UG:  Well, best of luck to you guys and we hope to see a lot more out of you.  Stay safe and it was definitely nice meeting you guys.

To stay up to date with Them Evils visit the Official Site or like them on Facebook.

Posted by unpaidgamers on October 15, 2016 in Articles and tagged entertainment, louder than life, louisville, music, them evils.